Georges Braque was born in Argenteuil in 1882. His father was a house decorator, and the young Braque first followed his father's trade, though also attending the Le Havre Art Academy, the school of Batignolles, and the Académie Humbert in Paris. It was the 'Fauves' (wild beasts) work in the Salon d'Automne of 1905 that directed him to fine art, and he spent the autumn of 1906 in L'Estaque, in the country of Paul Cézanne, whose work he came to admire. He exhibited with the Fauves in 1907 and met Pablo Picasso, with whom he developed the Cubist style and a close working relationship. Till 1912 the style was 'analytical' Cubism, but thereafter a more 'synthetic' and decorative style prevailed, which incorporated letters, labels and trompe-l'oeil effects. Other materials — paper, wood, or sand — were also introduced. Braque served in World War I, suffered a severe head injury, and picked up painting again in 1917, though only exhibiting publicly in 1923. Braque extended synthetic cubism into an impressively decorative art, but also created etchings, lithographs and woodcuts, adding sculpture and pottery in 1939. He died in Paris on August 31, 1963. 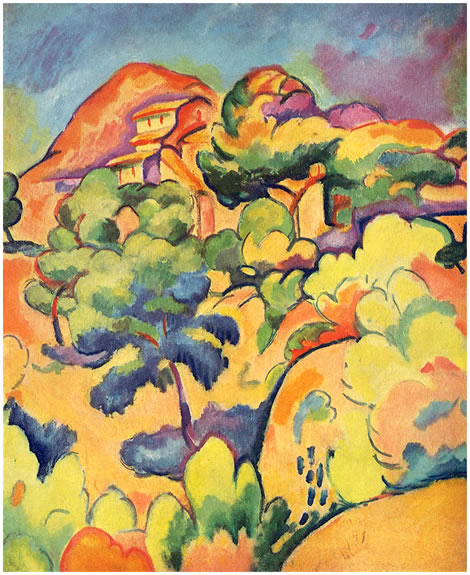 Encouraged by his success at the Salon des Indepéndents in 1907, where he sold all six canvases exhibited, Braque came to the French Riviera, settling for a while at La Ciotat, between Marseilles and Toulon. Here in the hills behind the town, in a countryside familiar to Cezánne, he painted this popular study, so redolent of the older master but entirely different in outlook and technique. For Cezánne, each stroke of the brush was an effort, and there were many corrections and downright failures. Braque's piece simply accepts the flat nature of the canvas, and lays out a pleasing composition with fluid shapes. The upward movement of Cezánne's late work is retained, but there is still some sense of depth created by overlapping planes. Trees, hills and building are simplified, but the units are conceived not as tiled brush strokes but as coherent theater flats filled with vibrant color. And whereas Cezánne's work is invariably laboriously composed, this piece is simple, joyous and decorative, exhibiting a good eye for color harmony: the blue-violets of the sky are repeated in the trees and other foliage. Color is now serving emotive and not descriptive ends, and while academicians might deplore the exuberant naivety, the way was now open to other ways of filling the canvas. 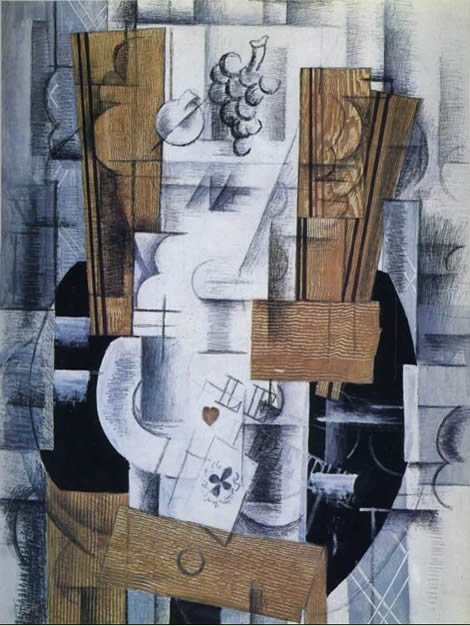 Braque's return to Paris in 1907 coincided with a Cezánne retrospective at the Salon d'Automne, and Picasso's work on Les Demoiselles d'Avignon in his Rue Ravignan studio. In December 1907, Braque began his own monumental nude, worked on heavily throughout the winter, but not so expressive and 'primitive' as Picasso's. He went back to the l'Estaque in the summer, and now painted a series of austere landscapes, muted in color and composed of rectangular slabs and blocks (hills and houses) and cylinders (trees). All were rejected by the Salon d'Automne of 1908. Like Cezánne before him, Braque then turned to still lifes, painting pitchers, cups, fruit, cards, newspapers, guitars, violins, etc. in an increasingly fragmented way. Colors became muted, muddy even, though Braque usually breaks up the planes into facets of brush strokes that add an an air of ambiguity: quite where these elemental shapes exist in the third dimension is never clear. Gradually this 'analytical' period of Cubism became exhausted: the subjects had dissolved into abstract medleys of dull gray and brown planes — 'interesting' work but not attractive nor offering obvious avenues of development. In July 1912, Braque joined forces with Picasso and hammered out a new style: 'synthetic' Cubism. Just as he had dropped Cezánne's analysis of form in the La Ciotat landscape, so Braque now divorced color from form, and made collages of recognizable cutouts, the cutouts being painted, or simply strips of wallpaper, oilcloth or newspaper glued in place.

So the work above, where we see a round card table, the odd drawing of a card, a bunch of grapes and bit of lettering, and various panels, sometimes patterned or left a bluish gray. Perhaps the upright shapes are players, or shapes borrowed from violins, etc. It hardly matters: the work is largely abstract and to appreciate the piece we have to like its balance of elements, their staccato rhythms, and effectiveness of the decoration, simple but not boring. (Also worth noting are the elongated panels that appear in de Staël's much later painting of the Musicians, and indeed the painters were close friends.) 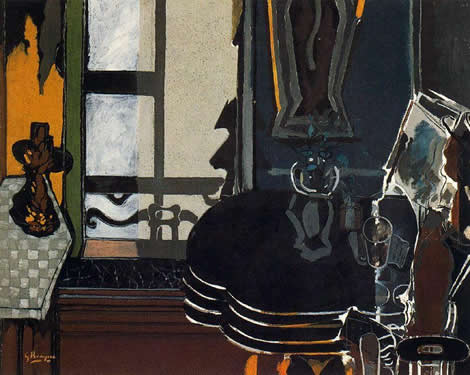 Synthetic Cubism is the style Braque stayed with till the end. The subjects were everyday objects of a middle class home, but Braque nvested them with a strange intensity, as though we were seeing aspects of them in a new way. "The Salon" was painted just after liberation from the German occupation, and shows a world not somber but resplendent. Though three quarters of the painting is dark, and large areas are left undecorated, the reflection on the table and the wine glass etc. on the right suggest a sparkle or deep celebration to the scene. The distortions of Cubism — multiple viewpoints — are everywhere, and the familiar outlines are simply painted or scratched through to the canvas, but their improvised nature adds an air of mystery. What is that strange orange panel in the top left? Or the smoky gray panel alongside: the sky? What is that tangle of outlines beside the wine glass portraying? There is no master plan: Braque has painted what he can, and then stopped. Beyond lies abstract expressionism and new ideas of art altogether, but Braque as a good bourgeois has stayed within the world he knows. How that is accomplished, the precise balance of the conventional with the experimental, is what forty years of painting represent, and the achievement passes into what sympathetic critics recognize but cannot fully explain. Painting, in short, is an art of doing, of practical experience, and no amount of clever talk can supersede the painterly sensibility that has to be slowly acquired.

4. 'Braque' by Jean Leymaire (Translated by James Emmons). Skira 1961. An older monograph, but still sound and with attractive illustrations.