Cézanne was born in Aix-en-Provence on January 19, 1839, the son of a wealthy banker whose allowance if not support enabled Cézanne to continue producing works that brought in no money or critical approval.

In truth, the young man had no obvious gift for painting but was grudgingly sent to study art in Paris. Zola was a boyhood friend, and in Paris Cézanne mixed with the more progressive element, including the Impressionists, though painting himself in a romantic, florid and heavy manner. From 1872, however, under Pissarro's tutelage, Cézanne began to paint out of doors, and exhibited with the Impressionists in 1874 and 1877. When his work attracted the harshest criticism, Cézanne drifted away from the group and spent more of his time in Aix-en-Provence. He quarreled bitterly with Zola in 1886 over the novelist's portrayal of a failed painter, becoming more socially isolated than ever. In his middle forties, Cézanne married Marie-Hortense Fiquet, his long-suffering model/mistress, and achieved financial independent when his father died a year later. Marie-Hortense left him shortly afterwards, however, and Cézanne moved in with his sister and mother.

So continued Cézanne's quiet existence, monastically devoted to paintings that continually disappointed him and which he often destroyed. His contacts with the earlier Impressionists were tenuous, but Cézanne's commitment to his art became legendary, attracting the interest of van Gogh and Gauguin. Following an exhibition arranged for him by the Parisian art dealer Ambroise Vollard in 1895, Cézanne became better known, and in 1904 his work featured in a major official exhibition. Young artists traveled down to see him, and the last years to his death in Aix on October 22, 1906 were comparatively happy. Marie-Hortense died in 1922. She was disinherited by Cézanne, but received a settlement from their son, which was gambled away. The son inherited the entire estate and died in 1947. 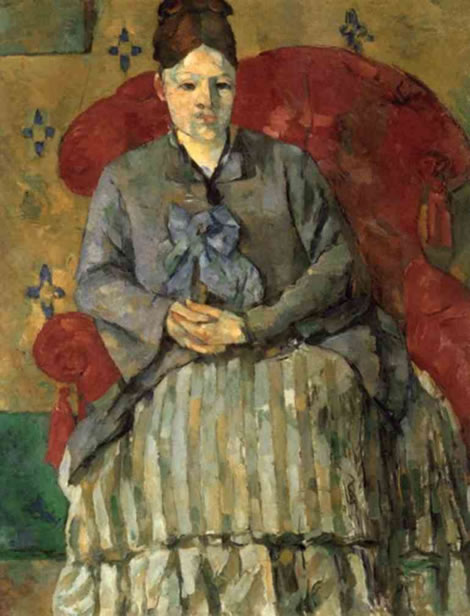 Cézanne was a slow worker, putting a great deal of thought into each stroke of the brush — as most painters do, but by him taken to heroic lengths. Composition, color balance and a host of other matters that the Academy had taught painters to work out before putting brush to canvas was abandoned in favor of a direct method that would nonetheless (if only occasionally) produce a successful painting. Each brush stroke not only represented 'something 'of what he saw, but also took account of all previous brushstrokes in aiming for two things: a sense of the third dimension that did not involve perspective, and an integration of elements into the plane of the canvas. Both are difficult objectives, and Cézanne's work often shows provisional, repeated attempts to get things right — in this 'bungling' (as Sickert called it) quite different from artists who copied him (e.g. Roger Fry) or the cubists (e.g. Braque and Gris) who just took the simplifications and made bold designs with them.

Madame Cézanne is an unusually pleasing work of Cézanne's early maturity. The color scheme is triadic — secondary triadic, as the colors are not primary but in fact quite muddy. The third dimension is given by overlap (the sitter partly obscures the chair and wall behind) and by tone. The dress billows out towards us, but is rendered ambiguous in depth by dabs of light gray to the extreme left and right of its fabric, bringing areas of shadow arbitrarily towards the light. The curve of the bust, and the shadow it casts give the sitter's torso some modeling, but again it's not consistent: the (sitter's) left breast is up and the right is down. As expected, the sitter's hands are further back than the front of the dress, and closer to us than the head, but we find on looking closer at the head, that it perversely seems in some way closer to us than the dress, probably because it's lighter and pinker (color perspective) than those olive-gray bands. In short, the rendering of the third dimension is only local, and this wavering effect creates an undulating surface not far detached from the canvas plane.

The sitter's head is left as an assembly of curved planes, which looks incompletely finished or 'knobby' by the earlier expectations of art, but is here part of Cézanne's purpose, which is to replace traditional impressions of depth by an interlocking complex of tiny planes. For a similar purpose, parts of the wall behind and the sofa are given patches of lighter tone, though the sofa on the viewer's left practically merges with the tiling: there is is no sense of depth here. The sofa is given a dark outline on the right, however, and its shape is distorted, appearing as a separate curve on the other side of the head. The arms make a cross with the ends of the jacket (and distorted, the left forearm is longer than the right), and that cross is echoed in the wall tiles. Part of that cross also forms part of the compositional device of curves — a very flat curve in the hoop of the dress and less so in the top of the sofa. Distortions are being made for decorative effects. 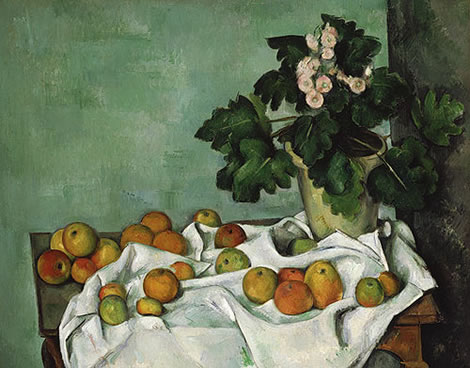 Cézanne rarely painted flowers as they were apt to wilt before his deliberations were complete, but he did depict apples aplenty, here convincingly modeled in the third dimension but enclosed in taut circular outlines. The flowers of the Chinese primrose are also circular, as is the right (to us) side of their enclosing pot — a distortion from the ellipse we would expect. The whole plant in fact looks flat and anything but succulent, yet seems to lean out towards us. The cloth and apples are ambiguous in the third dimension: receding comfortably into the distance in the left corner of the table, but being spilled vertiginously along the table edge near us. The painting is becoming angular, even formulaic, but is preserved from the abstract by the colors of the apples and their modeling. 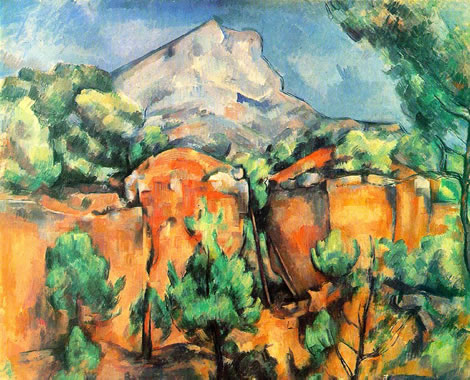 In this late work Cézanne has moved further to abstraction: simplified shapes, an only-hinted-at solidity, a thrusting energy to the rock forms, and the almost complete loss of the third dimension: the overhanging trees on the right seem as clouds, distant as Mont Sainte Victoire itself. The brush strokes are now laid like overlapping tiles, but the composition is conventional: three planes (trees, quarry wall and mountain), a rectilinear grid and a gentle swirling motion brought out by the rounded rock forms, the trees to the right and the shape of Mont Sainte Victoire.

Cézanne's art is an inspiration and a warning. Dogged persistence paid off, though never before had anyone so devoid of commanding flair and skill become a painter of the first rank. A warning because Cézanne is prized for what he led to — short-lived movements, promotion by critics, galleries and dealers, and investment opportunities for the wealthy as the traditional old masters were increasingly removed to public collections. It's Cézanne's intense devotion to his craft that distinguishes his work from those of followers, but — as with Monet — the paintings are far less novel than art critics sometimes assert. Nonetheless, the very action of painting, the thought that goes into each and every brushstroke, became important for one line of development, that of abstract painting. And, once severed from the need to create a photographic likeness, the canvas could serve as the battle ground for novel ideas as to what painting could and should be: cubism and expressionism.

1. Paul-Cezanne.Org. Devoted to the artists, with biography, reproductions and articles.

2. 'Paul Cezanne biography'. Biography.Com. Detailed, with reasons for his importance.