Jean-August-Dominique Ingres was born to Joseph Ingres, a miniature artist and sculptor, in 1780 and eleven years later entered the Royal Academy of Arts in Toulouse, where he also played in the local orchestra. In 1797 Ingres went to Paris, attending David's studio and winning the Prix de Rome in 1801. To help support himself — commissions for depictions of the ancient world were always few and far between — Ingres undertook portrait drawings of tourists and visiting celebrities, now much-treasured miracles of close attention. From this early stay in Rome also came paintings that were not well received: 'Oedipus and the Sphinx 'and 'The Valpinçon Bather'. Ingres stayed on in Italy, first in Rome (1806-1820), then in Florence, studying Renaissance work and producing some of his best-known portraits: 'Mme Duvauçay, Joseph-Antoine Moltedo, Charles-Joseph-Laurent Cordier' and 'Count Nikolay Gouriev'. In 1813 he married Madeleine Chapelle, a milliner from Guéret, the start of a long and happy marriage, and in the following year he painted 'La Grande Odalisque', which was commissioned by the Queen of Naples and exhibited in the Paris Salon in 1819. Three years later, Ingres returned to Paris and won official recognition with his 'Vow of Louis XIII'. He was elected in the Academy and awarded the Order of Honor.

His long stay in Italy, to which he returned in 1835 as Director of the French Academy of Arts in Rome (1835-1841) made him the champion of Neoclassicism, and that role induced him to paint monumental canvases that Ingres himself regarded as his greatest achievements but appear to us somewhat grandiose and lifeless: 'Apotheosis of Homer' (1827) and 'Martyrdom of St. Symphorien' (1834). Ingres was fascinated by women and when his first wife died he married the twenty-year-old Delphine Ramel, in 1852, at the age of 61. Death came in 1867 from pneumonia, contracted when driving bareheaded with a beautiful young model. 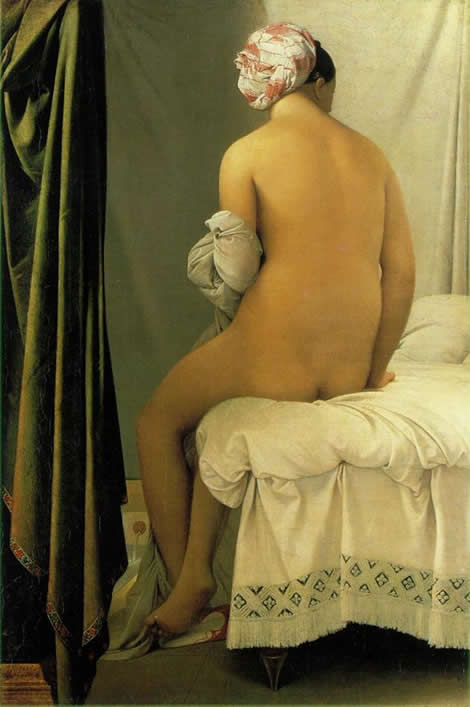 The painting dates from Ingres' first stay in Rome and established him as a name to watch, though a controversial one. Ingres added a new form to that most commonplace of European themes, the female nude, and returned to it in many subsequent paintings, where its triumphs and failings were further developed. 'The Bather' is a chaste portrayal of womanhood, or perhaps one should say a very finished picture of restrained voluptuousness, where the painter's brush has caressed a form that, throughout the back, shoulders and upper arms, is convincingly warm, heavy and palpitatingly solid. That sensitivity to surface appearance is also demonstrated in the drapery of curtains and bed-covering, and Ingres indulges in his favorite device of showing large expanses of canvas where nothing happens interspersed with minutely observed details: the turban, the sheet wrapped around the bather's left arm, and the decoration in the drapery. Water flows into the bath glimpsed in the lower left of the painting, which draws the eye in that direction, as though elongating the figure as we progress from tap to sheet about the arm and turban.

Ingres has emphasized the rounded contours of the body, making the right arm a continuous curve, and emphasizing the muscles in the upper left leg. To this calm and rhythmic assurance are added sharp tucks: in the hanging drapery, the creases in the bed-covering which disappear into the buttocks cleft and the crossed legs. Though possibly unconscious — unlikely as that seems in an artist who planned so meticulously in repeated drawings and studies — the effect is to make the woman a focus of sexual desire and possibly (if we see the bedcover creases as flowing away from her) a source of female fecundity. What seems self-occupied and chaste becomes more ambivalent on closer inspection, and Ingres' approach was better appreciated towards the end of his life, when Neoclassicism was giving way to Romanticism and a closer look at everyday life.

These achievements are purchased at some cost. The lower legs are lifeless, and the right foot dangles at an improbably angle, seeming, moreover, to lack proper musculature and shaping. The head is turned away from us and the lighting makes the face seem disconnected from the neck. The hip is much too high, and the lower back bulges towards us in a somewhat ungainly fashion. All these departures from realism will be deliberate: Ingres was a careful student of nature and there are countless life drawings to show the painter had an exact knowledge of human anatomy.

Ingres' nudes are curiously devoid of personality. Here we do not see the face, and in his many other nude paintings, Ingres presents a generic woman, a rather boneless one, but displaying a classic proportions that replace individuality. Boucher does the same, of course, as does Tiepolo. All could achieve a speaking likeness but are painting something else: not a real woman but femininity as they saw it, or the fashions of the age chose to present it. Indeed, as critics of Neoclassicism continually observed, Ingres does not show local color, or hues modified by surroundings, but objects in an artificial ambiance of lighting, as though presenting the essential or eternal in our changing and ever-muddled world. 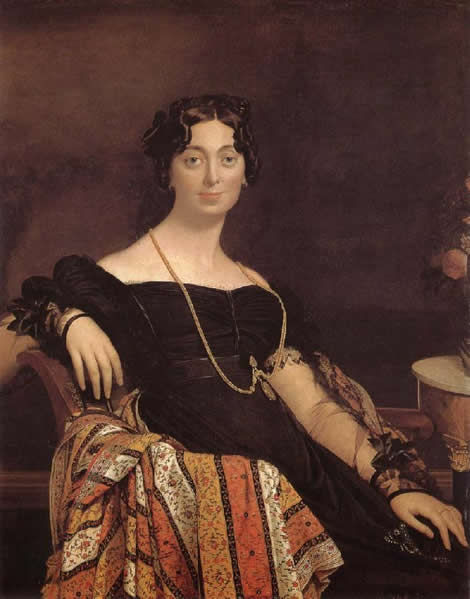 The painting belongs to Ingres' mid-career work, and is a triumph of composition. Note the limited color range and the absence of drama: it is an intimate portrait of a private woman where the accessories — over-fussy in other hands and tending to detract from the portraiture — become pointers to her personality. Mme Leblanc's is a pleasing face, kindly and intelligent, but not one to which we'd give second glance if passed in the street. Her hair seems over-elaborately done, the hands are large and the arms are beribboned as in some expensive chocolate box. The patterning in the wrap is minutely depicted — Ingres always lavished his perfectionist skills on these details — and seems to compete for our attention. And yet this plainly-dressed woman with her unremarkable face dominates the work. How?

Ingres surrounds the portrait with details but emphasizes the sitter by making the color composition exceptionally plain: a severe brown dress, hair the same color, and a brown background out of which the dress and flesh tints emerge. The eye is led forward from the flowers and table on the right to the patterned drape that falls over the armchair, making this plane the nearest to the viewer. The shape of the armchair ( its back and arm) plus the right edge of the drape are echoed in the figure above, most notably by her arms and the pale flesh above the bodice. The face — a rather wooden face, some observers have felt, and not perfectly married to the hair — completes the foci of interest in the hands, table and flowers. The arms, however, as critics noted, are much distorted. Her left arm is a little too long, particularly the forearm, which should be foreshortened more. Her right arm has almost disappeared. So severe a foreshortening would be possible if the armchair were a chaise-longue, but Mme Leblanc's does not seem to be seated that far back, at least to judge by the lower part of her dress.

Again the distortions are deliberate, here to make the arms a living entity, as though Mme Leblanc would at any moment rise from her chair and embrace the viewer. 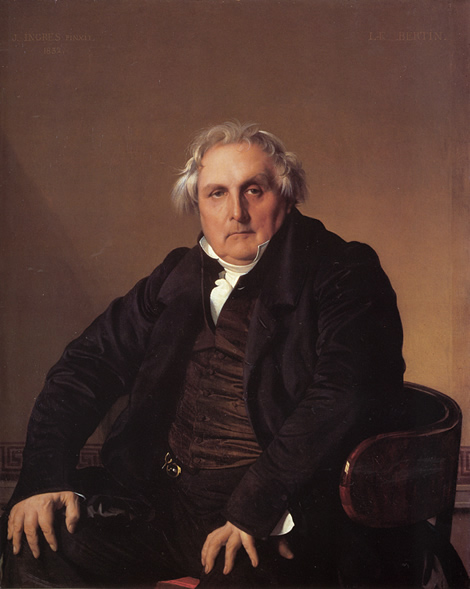 The celebrated and immediately popular portrait of M. Bertin, often regarded as one the great portraits of the nineteenth century, came after long and despairing attempts by Ingres to find a suitable pose, and did not apparently create the calm impression wanted by the sitter. The hair is untidy and the hands look more like talons. To many critics the thumb in the left hand was set too far back, and it seems unlikely that those tapered fingers so beloved of Ingres (which he customarily paints though they are rare in actual life) belonged to a newspaper magnate whose demonic energy is epitomized in the hunched body, hard set to the mouth and pitiless stare from eyes unequal but firmly fixed on the viewer. As in the portrait above, the piece is an uncompromising study in brown, offset only by white glimpsed in cuffs and necktie, the graying hair and the glint from watch-chain and polished arm of the chair. The composition is basically a pyramid, but one bulked out the curve of the right arm and details on the left. The hands anchor the viewer's attention to the base of the painting, and from there we are led through back of the chair and the imposing bulk of the figure to the face that stares with gimlet intensity. M. Bertin was clearly a determined man, who got things done. 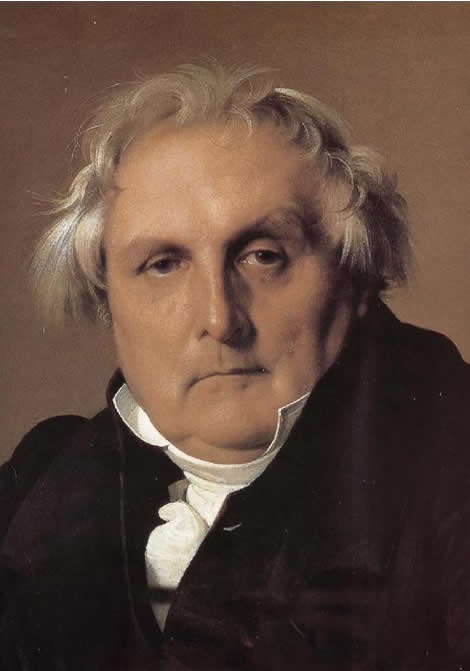 Louis-François Bertin was director of the 'Journal des débats', a symbol of the confident middle class, but also a writer, art collector and both friend and patron to Ingres. He was 66 in 1832. His hair is almost white and there is an ominous hollowness to the cheeks; the right eye seems recessed. But it is not a portrait of a man defeated by age and circumstances, quite the contrary. The left eyebrow is raised enquiringly and a sharp tuck to the mouth shows someone who will still give nothing away. Above all, the face expresses energy, a volcanic energy to judge by the eruption of hair and uplifted eyebrows. But it is also a compassionate portrait, and one where we see the left side of the face and unruly bulk of the body below struggling against age and debilities it brings. Ingres was generally happier with woman sitters, but here has understood his own sex, perhaps because at fifty the painter too was approaching the darker side of life — or so he imagined, because he was in fact to marry again and continue associating with beautiful women till his death at the age of 87.

2. 'Jean-Auguste-Dominique Ingres.' Olga's Gallery. An old site but much useful information and references.

6. 'The Bather, known as the Valpinçon Bather'. Dept. of Paintings, Louvre. Slow acceptance of the piece.

10.'The Society Portrait from David to Warhol'. A glossy coffee-table book that covers Ingres and provides excellent color plates of paintings and details. Ingres comes out well in this comparison of talent and approaches.

12. 'Portraits by Ingres: Image of an Epoch' by Gary Tinterow and Phillip Conisbee (Eds). Metropolitan Museum of Art 1999. Attractive but partial survey.

13. 'Ingres' by Andrew Shelton. Phaidon 2008. The most complete monograph to date.

16.' L'Opera completa di Ingres 'by Emilio Radius. Rizzoli Editore, Milan. 1968. An old work, published in Italian, but with very acceptable color plates and a full record (in black and white) of his paintings and a good selection of drawings. Out of print.