Nicolas de Staël was born in 1914 into the military aristocracy of St. Petersburg. To escape the revolution, the family emigrated to Poland, and from here, on the death of his parents, the young Nicolas was sent to live with a Russian family in Brussels. Ten years later he studied at the Brussels Académie Royale des Beaux-Arts, traveled through Europe and north Africa, and met his first life-partner, Jeannine Guillou. Between 1939 and 1941 de Staël served in the French Foreign Legion, returning first to Nice and then Paris, where he lived with Jeannine in great poverty. He had exhibitions in 1944 and 1945, but success came too late for Jeannine, who died of illnesses resulting from malnutrition in 1946.

De Staël then met and married Françoise Chapouton, and from 1947 began to attract attention, first in Paris and then New York and London. The New York dealer Paul Rosenberg gave de Staël an exclusive contract in 1953, making the artist a commercial and critical success. Prices were raised and more paintings requested even as de Stael himself withdrew into insomnia, self-doubt and depression. He now had four children and an international reputation, but in the autumn of 1954 moved with his family to Antibes, seeking rest and reflection. On March 16, 1955, following a meeting with a disparaging art-critic, he leapt to his death from his eleventh story studio terrace. 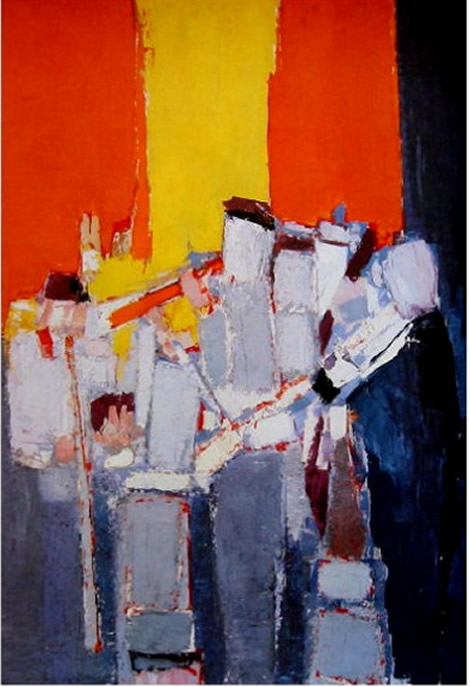 De Staël's earlier work was derivative — or to be more charitable — was influenced by Cézanne, Matisse, Picasso, Braque, Léger and Soutine, as was the work of many modern painters. The early pieces were competent, sensitive and interesting, but gave little hint of what was to come. From 1940 de Staël moved towards abstraction, producing a thousand works over the next fifteen years, though again these earlier works that hang in national art galleries are generally included because of the name rather than their intrinsic qualities. It was only in the late 40s that de Staël began producing his celebrated work, first abstract or semi-abstract impasto compositions in muted colors, and then the bright, fluid lyrical pieces that became instantly collectable.

The musicians is a late work in de Staël's impasto style. The figures have been reduced to blocks and integrated with a background of four vertical strips. The edges are slightly off the vertical, and this feature, coupled with ragged edges and color variations produced by the palette knife, create movement, which is here a vibrant staccato rhythm. Such features by themselves would not produce satisfying work, but the slabs of colors are extremely pleasing in themselves, showing subtle modulation, variety and an intrinsic feel for balance. Move one of them a little, and the effect is spoiled. 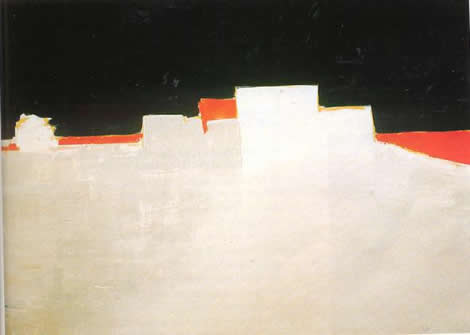 The canvas is one of a series painted in Sicily during the summer of 1953. The pieces vary from this simple work where the hot Mediterranean sun has bleached out hues to very brightly colored works, but all attempt to express landscapes in simple geometric shapes — in this painting by blocks, in others an assembly of triangles that taper to a vanishing point. De Staël's concern was light: the sky (here unbearably bright and so painted black), and the glare and shimmer from objects in the fierce Mediterranean sun (road and buildings). More exactly, De Staël's concern was the effect of the light on him, the painter, who had to find painterly equivalents to his 'impressions before nature' (as Cézanne put it).

The task is an exceptionally difficult one, as there are no external features to be rendered in any facsimile of nature, but each work has to be created afresh, as an expression through purely painterly means of the overall visual impact. De Staël did make drawings and studies, but in these paintings seems to have painted direct from nature, and it is a tribute to his powers that so many were successful.

De Staël was prolific towards the end, perhaps too prolific, as the overwork contributed to his suicide, but the result was an inspiration to the American abstract expressionists that came afterwards to dominate the art scene, though in these artists there are no figurative allusions and whatever emotion exists is created in and by the very action of painting.

2. 'The composition of a picture to and around Nicolas de Staël Beyond the finity' by François Murez. Secret geometry of de Stael's 'Le Concert'. Somewhat oversimple.