Raffaello Sanzio was born in Urbino on April 6, 1483. His father was a painter for the Duke of Urbino, and taught his son the basics of the craft, so well that Raphael took over the workshop at the age of eleven when his father died. His work soon attracted attention. Perugino invited him over as an apprentice, and under the master's guidance the young man developed the style seen in such works as the 'Mond Crucifixion' (c 1502), the 'Three Graces' (c 1503), and the Oddi altarpiece, 'Marriage of the Virgin', completed in 1504.

In 1504, Raphael left Perugia and moved to Florence, where he came under the influence of Fra Bartolommeo, Leonardo da Vinci, Michelangelo and Masaccio, developing a more intricate and expressive style. From 1504 to 1507, Raphael produced a noteworthy series of Madonnas,and then the Entombment, his most ambitious work in Florence.

Raphael moved to Rome in 1508 to paint in the Vatican rooms under Pope Julius II’s patronage, creating highly-regarded fresco cycles, which express the humanistic philosophy of the Urbino court. By 1514 he was able to hire a crew of assistants to help him finish painting frescoes in the Stanza dell’Incendio, which enabled him to accept other commissions, including that of chief architect to the Pope after Donato Bramante's death. The work included design of the Santa Maria del Popolo Chapel, part of Saint Peter’s basilica and various palaces, so laying the foundations of the late Renaissance and early Baroque styles.

Raphael died of unexplained causes in Rome on his 37th birthday on April 6, 1520, leaving uncompleted his largest work on canvas, the 'Transfiguration'. 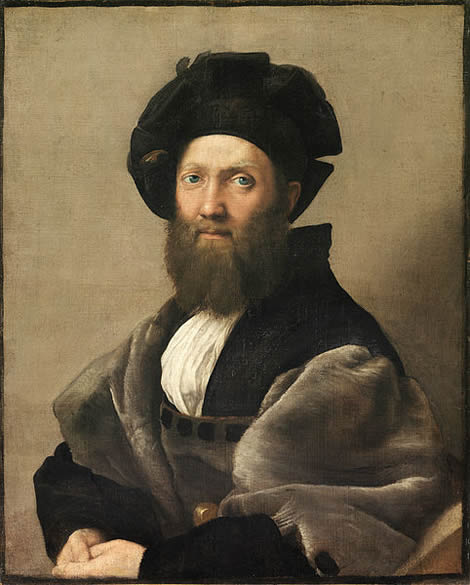 The portrait, one of the most celebrated in western painting, depicts Raphael's friend, the diplomat and humanist Baldassare Castiglione, whose rapid ascent into courtly circles paralleled that of Raphael himself. The piece was originally painted on wood but later transferred to canvas. Seventeenth century copies show the hands in full, suggesting several inches have been cut from the bottom.

The composition adopts the common Renaissance pyramid, but there the conventional ceases. The piece is firstly produced with the simplest of color schemes: warm grays and browns, with a touch of blue for the eyes. The second feature to notice is the balance of shapes which the composition creates: the figure occupies the frame so as to make the negative space itself interesting, with the v-cuts in the outline of the hat repeated in the meeting of the hat and collar, and the tilted wooden plane his let arm rests on. Those v-shapes are also repeated in the folds of the squirrel fur trim and right elbow. A feather in the hat balances the v-cut, makes a link to the beard and trim, and prevents the hat appearing too heavy. Even the shapes of the black doublet and hat are constantly varied, and form in themselves (half close your eyes to see) a descending scale that is not allowed to become decorative but is tied to the background by dark shadows in the extreme right of the painting. The sheen on the squirrel hair trim imparts a glowing darkness to the doublet. The soft contours of the clothes, the fabrics involved and the rounded beard suggest the subtlety of the man who wrote 'The Book of the Courtier'. Many portrait painters copied these devices, most notably Ingres in 'Monsieur Bertin' and other portraits, but few created so sensitive a rendering.

Though the 'Book 'popularized the term' sprezzatura', which has been translated as 'nonchalant mastery', an effortless grace befitting a man of culture, the portrayal is not of elegance but intelligence, humility and honesty. The eyes are not identical, and that on the sitter's right seems further back (cover half the face with your hand). A unsettling ambivalence is created, with one half of the personality assertive and very much in control, and the other half reserved, waiting and wary. The mouth is full but cut off by the beard, where those dark bounding cuts suggest a man who sees much he doesn't like but will keep his own counsel. 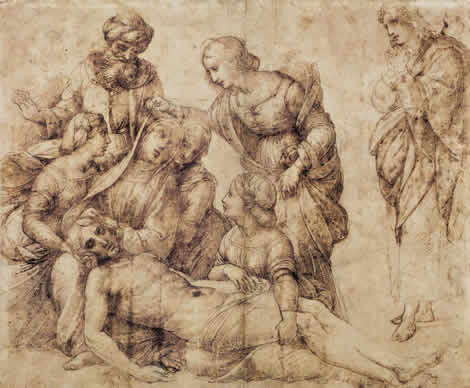 Most Renaissance painters made sketches, to try out compositional schemes and make blueprints for assistants to enlarge and transfer in outline to walls and canvases. Raphael's are particularly sensitive — more like the later Venetian painters than his contemporaries in Rome — and helped shape the creative process. Over 400 survive, a small portion from an astonishingly prolific artist. First would come rapid sketches, then more finished drawings and finally highly finished drawing for transfer. Raphael learnt silverpoint while studying with Perugio, and he used this extremely demanding medium that does not allow mistakes throughout his career. Pen and ink was used extensively after 1505, and to these were often added washes in ink or lead white. Black chalk drawings appear in his earliest drawings, and red chalk — which allows delicate and extensive modulations of tone — after 1524. Many of the drawings are of great beauty, and command enormous prices when they come on the market. 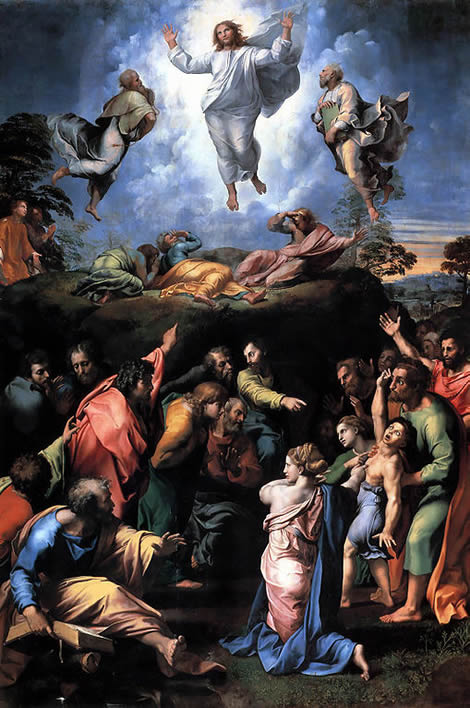 Cardinal Giulio de Medici, cousin to Pope Leo X, commissioned two paintings for the cathedral of Narbonne, 'The Transfiguration of Christ 'from Raphael and 'The Raising of Lazarus' from Sebastiano del Piombo, so rekindling the earlier competition between Raphael and Michelangelo. Raphael worked feverishly to complete the work, leaving assistants only to finished some of the lower left figures at his death in 1520. The difference in quality is very noticeable.

The painting combines two biblical narratives: the transfiguration of Christ himself and the failure of the Apostles fail to cure a boy from demons. Raphael made studies of all the figures and incorporated them in a composition of intersecting triangles that is already looking on to the future: to the Baroque in the dramatic lighting and vigorous gestures based on diagonals, and to Mannerism in the dimensions and contorted poses of the figures.

The picture seems to reference the delivery of the city of Narbonne from repeated assaults of the Saracens, and a detailed iconography can be identified: even to the epilepsy of the boy being evoked by the moon's reflection in the lower left of the painting. The two figures kneeling on the left are Justus and Pastor, sharing the feast day with the Feast of the Transfiguration and patrons of Medici's archbishopric and the cathedral of Narbonne. The kneeling woman, painted in a lighter key and serving both to link the two groups below and balance the ascending Christ above, adopts a figura serpentinata or serpent's pose, with head and buttocks twisting in opposite directions as she seems to turn away from the moonstruck boy and accept the attentions of the nine apostles on the left. The figure on the far left may be Judas Escariot, and the world below, darkly agitated with the sins of man, is contrasted with the ecstatic purity and simplicity of the world above.

6. 'Drawings by Raffaello'. Web Gallery of Art. Introduction and an excellent selection of work.

8. 'The transfiguration'. EpilepsieMuseum. The epilepsy aspect in more detail.

10. Raphael, an exhibition in Tokyo

13. Vermeer and the mashup

14. How the Restored Raphael Frescoes Hang over Pope Benedict.

Raphael - The Prince of Painters pt. I of II

The School of Athens: Visually Representing the Flow of Knowledge

Raphael - Art in a Perfected Form