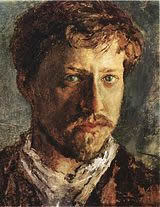 Valentin Serov was born in St. Petersburg in 1865, the son of the composer and music critic Alexander Serov, and Valentina Bergman, a pianist and civic figure. In 1872-3, Serov took lessons from Karl Köpping in Munich, and, on the premature death of his father, from Ilya Repin in Paris from 1874-5 and from 1878-80. In 1880 he returned to Moscow, and until 1885 worked with Pavel Chistyakov at the St. Petersburg Academy of Arts and at the painter's studio. He visited Germany, Holland and Belgium in 1885 and Italy in 1887.

He began exhibiting in 1885, focusing on portraits of actors, artists, and writers, in which he was influenced by the realism of Ilya Repin, the old masters, and his friendships with Mikhail Vrubel and Konstantin Korovin. In 1894, Serov joined the Peredvizhniki (Itinerants), receiving important commissions from the nobility, which he executed in the grand manner, though remaining open to new influences. He married Olga Trubnikova in 1887, and in 1900 joined 'The World of Art' movement, turning away from the Peredvizhniki and becoming more democratic in outlook. Impressionism disappeared from his work at the turn of the century, and Serov turned to historical and mythological subjects, to which he added his own interpretation. Serov sympathized with socialist movements, but died before the Russian Revolution, in Moscow on December 5, 1911. 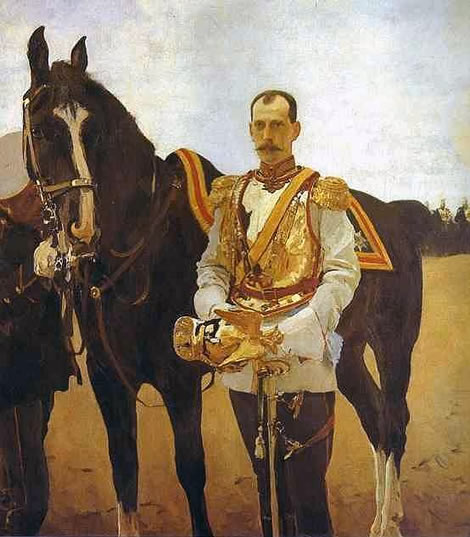 Valentin Serov was a greatly gifted artist who worked in a wide variety of media: oils, watercolor, gouache, tempera, ink, pencil, chalk, charcoal and pastel. Under Chistyakov's stern eye he developed that most essential gift for a portrait artist, the ability to capture a likeness, which enabled him to gain important commissions from the middle 1880s. The skill never left him, but Serov used it to 'get beneath the skin', to produce psychologically-apt portraits that were sometimes simplified but never caricatures, at least until the 1905-7 period when his anger at the repressive regime boiled over. He resigned from the St. Petersburg Academy of Arts at the execution of workers and their families striking on January 9, and turned more to painting Russian history and the classical world.

Serov's portraits developed towards greater simplicity in execution and variety in compositional devices. In the painting above of Grand Duke Pavel Aleksandrovich, the third dimension has been greatly restricted and the figures are approaching cutouts. There is no distance between the horse and the ground behind it. The tail merges the other riders behind and makes part of a complicated screen of brown: horse, attendant, the grand duke's trousers. The screen nonetheless has great rhythmic subtlety and variety, and the aging in the paint shows how much its outline was retouched.

The color scheme is blue against analogous red, orange and red. The yellows in particular glow with a rich intensity, in the parade ground and the gold decoration of the grand duke's insignia, which are picked out in great detail, as would be expected by so important a sitter. There are subtle repetitions of shapes which emphasize the context. The triangle of the mustache, the horse's cape and the edge of the glove and tunic point skyward. The legs of both horse and grand duke widen upwards as though opening to the space where the marks of rank are impressively displayed. The horse turns its head toward the grand duke, and he himself stares impassively out of the canvas, stoically aware of his position and social responsibilities. 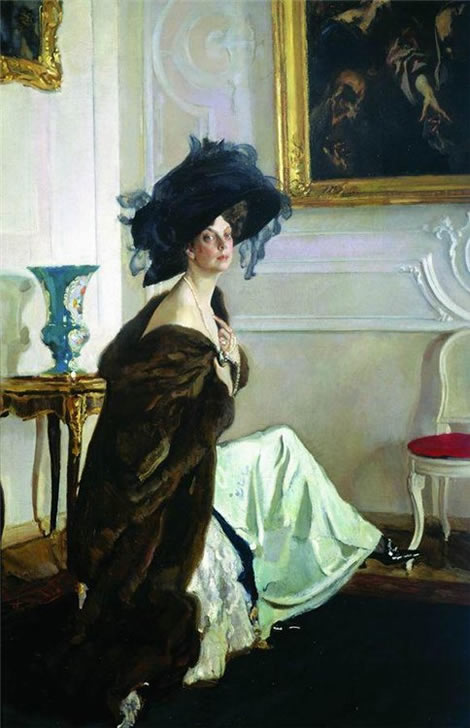 The eclectic 'World of Art' movement owed much to the impresario Sergei Diaghilev, who gave the leading Russian artists of the day — Somov, Bakst, Repin, Benois, Lanceray, Kustodiev, Serov, Sapunov and many others — a place on the international stage and encouraged them to revitalize painting, book illustration and theater design. The artists concerned had their individual styles, all immediately recognizable, but were united in their reverence for the work of the past and an openness to new ideas, particularly to the Impressionists of France. Serov participated in the 'World of Art' exhibitions from 1898, but had already introduced Impressionism into Russia with his celebrated 'Girl with Peaches' of 1887. Between these new ideas and commissions from the old world Serov continued to oscillate, to paint imposing portraits of the nobility, intimate sketches of his fellow artists, and to design theatre sets.

In his portrait of Princess Olga Konstantinovna Orlova, Serov faced a peculiar difficulty. The sitter was no great beauty, and was dressed in the conspicuous finery — patent leather shoes, sable furs and flamboyant hat — that Serov, though for long a painter of the nobility, could only resent, necessarily contrasting those riches with the ill-fed masses outside, whose modest demands for greater social justice had been savagely repressed. Serov's solution is oblique social comment. Princess Olga is shown as the centerpiece of the old regime. She maintains a poised aloofness, perfectly conscious of her position in society. The extravagant finery is worn with a panache: she clasps the pearl necklace and throws a leg out as though to balance the oversized hat. She is perched on a chair or stool in conspicuous elegance, with the old master painting, the porcelain vase on its gilt table and salon walls serving to comment on her wealth and taste. The trailing edge of dress and sable coat lead the eye in, which continues until lost in the blue veils of the hat. The out-thrust leg fills the center right of the painting and again leads to the face and hat. The paintings, table and chair are placed at the edges of the painting as though thrown centrifugally out from their imposing owner. 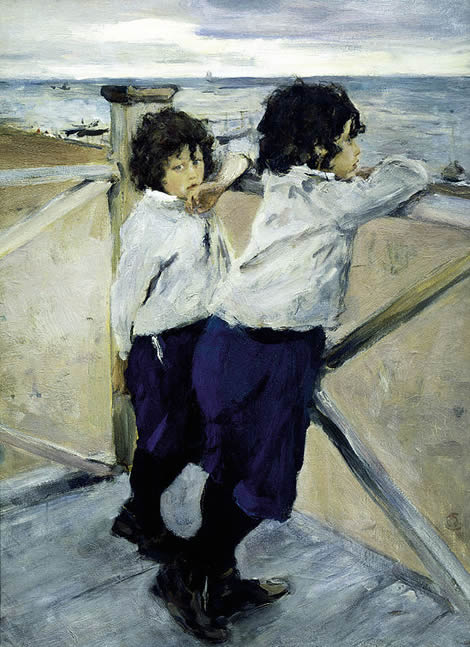 Serov often produced intimate portraits of women and children. The two boys are Serov's children, Sasha and Yura, and the painting is not the improvised sketch it first appears. The palette is restricted to muted blues and orange, and Serov's innate sense of balance is still in evidence. The sea and overcast sky above are matched by the blue grays of the platform the boys are standing on. The beach tapers off towards the top left. The struts of the platform slant towards the top right of the painting, and the direction is picked up by the arms of the two figures. Their feet also point in these two direction, probably an unconscious touch by someone to whom composition was second nature. So as to tie the figures into the plane of the canvas, Serov has introduced an arbitrary lightness in the beach in the left middle of the canvas and added white about the right lower strut.

None of this would be important — we should be back into the painless abstraction of much twentieth century painting — but for the expressions so sympathetically captured of the two children. Serov's pieces were often preceded by planning and failed experiments, but here the small size of the canvas allows little reworking. However achieved, the expressions are exact and achieved by the dexterity of the brush guided by close observation and empathy for his subjects.

So we see a major realist painter poised on the brink of modernity. He can paint in the grand manner and invest his sitters with dignity and panache, and do so without adding unnecessary details or complications. But he was also searching for a way forward that would be true to the age and yet still preserve the breadth and humanity of the European civilization he so much admired. Serov's history paintings of Peter the Great and the Empress Elizabeth are extraordinarily vivacious, and his paintings of the Mediterranean breathe something of the sparkling freshness of the early world, but Serov never found a way of fusing these developments with the democratic stirrings of a new age. Within a few years of his death the Revolution swept old Russia away and, after a brief period of artistic license, imposed a heavy neo-realism style that glorified Stalin and the common man in ways that were patently untrue to those who had sensitivity and the courage to look.

2. 'Prominent Russians: Valentin Serov'. Russiapedia. Sympathetic account of the painter and his life.

5. 'The World of Art Movement in Early 20th-Century Russia' by V. Petrov and A. Kamensky. Aurora Art Publishers, Leningrad. 1991. Attractive and detailed account of its more important members.

A World of Lost Brightness, Part One